Remember way back when (like the previous post?) when I said that I performed triage and ended up having to cut off all the nails?  And that I’d only gotten to use one of the big slug of polishes that I’d just scored on the latest Sally BOGO deal?  So, you’d think that I wouldn’t be purchasing even more polish since I just got a bunch (like I didn’t already have a metric tonne) and wouldn’t be able to use any for at least a couple of months?

Side Note:  It might be more than a couple of months.  It’s been over a month and I don’t have much new growth at all because I’m getting flaking and peeling.  What’s up with that?  I’ve never had a problem with that before!

So, here I am minding my own business and I get a Sally email for free shipping over $25 (usually it’s $50).  Side Note #2:  If you shop Sally at all (and, if not, WHY not?), sign up for emails.  Yes, they send a lot of new product and sale emails, but they also send a slug of different coupons and 1-3 day deals that aren’t advertised in store.  And if you’re buying in store, you don’t even have to bother with printing it out from the computer.  Just show it to them on your phone and they’ll input the code.

I’m not super excited about it, but I am needing some other stuff when/if it goes on sale so it just hangs out in my inbox.  Yes, I have my gmail set to put Sally in the inbox with an important tag rather than in the promotional tab.  What???  Then I get an email later on in the month that they’ve got an additional 50% off red tag clearance!  So I motor on over to the site just to see and what do my wondering eyes behold?  B2G1 on nail polishes (except OPI)!!!  Do I even need to mention that I still had my 15% off total purchase reward coupon from the month before?  Didn’t think so….

I’m still not sold because it’s kind of against my religion to pay for shipping unless absolutely necessary and there’s not enough clearance stuff I like to make the $50 threshold.  And I’m not buying anything full price just to bump it up. Then I go back through my emails and hey! that $25 free shipping still has one more day before it expires!

Five minutes later a big wave crashes him off the roof and he drowns.  Guy gets to heaven and starts ripping God a new one.  “I put my trust in You, my faith was strong!  Where were You in my time of need?  “Dude”, says God, “I sent a 4WD, a speedboat and a helicopter.  What the hell were you waiting for?”

Okay, go ahead and laugh until you wet yourself.  I’ll wait…

So what does that have to do with anything?  I have free $25 shipping, 15% off total coupon, clearance plus 50% off and B2G1.  It’s the perfect storm!  I, unlike guy on the roof, know how to take a note.  The universe obviously wanted me to have more nail polish!

After all the shouting was over and the smoke cleared, I got 14 polishes for $27.  Total!  But wait, there’s more!  What if I told you that number included 3 Gelish minis (why do they call them minis, do they even make larger ones outside of base and top?) and 4, count ’em, FOUR OPIs?  Look, here’s proof! 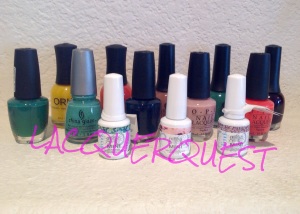 The only poop in my punch bowl was that one of the Orly I wanted (actually the only Orly I really wanted) was out of stock.  But they sent me a $5 coupon for a $1.50 bottle of polish, so it’s all good…

Of course the OPI weren’t B2G1 and weren’t exactly on clearance.  At most they were a buck or so off the regular price.  But the 50% off code worked!  I might not have gone through with the order if not for that.  And I think those clearance designations might have been by mistake on a few because they had most of all of the brand new Soft Shades from this year’s collection that just came out a few weeks before.  I only got one of them,  Put It in Neutral.  That’s also the only one of my new purchases I can really wear right now because it’s a fantastic light, muted pink.  That picture in the link isn’t really true it’s much softer and a bit more sheer.  You can see it in my photo between two of the Gelish.

I also only got one China Glaze because they only had two clearance and the other one sucked.  But I lucked out on that one, too!  See that gorgeous teal?  The picture they had on it was a grotesque yellow (that was the other clearance one).   A light teal with sparkles???  Colors like that NEVER go on clearance!  Apparently, nobody bothered to notice that the name of it was Teal the Tide Turns and do some legwork to see what the true color is.  Let that be a lesson, kids.  It always pays to do your homework!

So, given all that, if you can still tell me that I shouldn’t have pulled the trigger on this purchase?  Why are you reading this blog in the first place?  Ha!

To show that I do have some self control, the past three days Sally had a BOGO on all nail polish (except, all together now, OPI) and, even with my $5 coupon and a 20% off total purchase burning a hole in my inbox, I passed.  I should be good for a while now (famous last words) because nothing in the Hawaii collection really thrilled me enough for a full size at full price and, while the Zoya Summer collection is nice, there’s not really anything so different that I have to have it at full price sight unseen.  Next time I go to Ulta, I might check out what the couple that I like really look like in person.  Speaking of Ulta, I get double points for my entire birthday month and I haven’t set foot in there all month (yet, it’s only half over…ha!).

Now, I’m not making any promises come August or thereabouts, because the OPI Fall collection is Venice and from what I’ve seen in sneak peeks there is a lot of gorgeous stuff in there!  It seems like I generally prefer the fall over the spring.

So, how to sum up this post of wretched excessivity?

2 thoughts on “A Few Words on … Wretched Excess”