Well, my pictures are looking a little ragged and my nails aren’t much better, but if everybody waited for everything to be perfect then not much would get done, now would it?  So, let’s just say to hell with it and light this candle!

OPI does two full collections in the spring and fall with geographic themes (this spring it’s Brazil).  In between those, they do a small collection which is generally tied in with a summer movie (this year it’s Muppets Most Wanted).  In 2011, the summer movie was Pirates of the Caribbean: On Stranger Tides and this polish is from that collection. 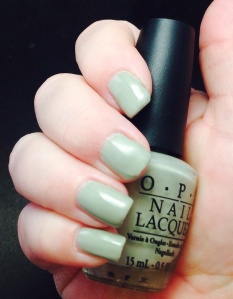 With the exception of a few shades that I love, I’m not much of a green fan (nail polish or otherwise) and never would have gotten this if it hadn’t been part of the mini bottle set.  Which is one reason that I love minis, because so often those polishes that I would never buy separately become favourites.  Such is the case with Stranger Tides.

From the outside of the bottle it looks like sickly pea green.  On the nail, it becomes a soft sage that’s dirtied up to give it some interest.  I really love colors that might otherwise be pastel when they’re muddy and grungy!  This one becomes surprisingly neutral when wearing it, not the same old boring beige and taupe, but also not one that screams GREEN!! at you.

There aren’t many that do a good old fashioned creme like OPI does and Stranger Tides is no exception.  The first coat is a little streaky, but not nearly as much as most light greens and blues are, and it evens out beautifully with the second coat.  Although I could get away with two coats on most polishes, I usually give an extra one for the Corps.  Just because….

Top it off with a coat of my beloved Seche Vite, and there you have it!  I like this one so much that I not only purchased a full size bottle in addition to the mini, but I might have gone overboard (ha!) and purchased several.  I need to do something about this back up compulsion of mine….