The two big deal OPI collections are the geographically themed ones for spring and fall (that actually come out a couple of months prior to the start of the season).   They have other collections they do every year, most notably the holiday and summer collections.  These have varying themes, most often a movie tie-in or a celebrity (their most recent celebrity is Gwen Stefani), but the spring/fall big guns are always centered around a geographical region.  Probably some of the hype over these is created by speculating on what city/state/country/region will be next.

The last couple years these collection have been a little hit or miss, but back in 2012 they were still going strong and the spring Holland collection was no exception.  There might have been a slight clunker or two, but no real flops and the collection as a whole was fabulous.  I probably have close to half a dozen of the Holland polishes and this is one of my favorites from that group.  I really don’t wear it that often, although I don’t know why.  That’s one of the fun parts of the Quest, discovering some real gems that I’d forgotten I even had!

I Have a Herring Problem is a medium, dusty blue with an understated shimmer of gold and silver.  Although it’s not even slightly teal, the blue leans green as opposed to gray (more on this in the following paragraph).  It’s a very wearable color, as the blue is about as close to neutral as blue can get and the shimmer is just a hint, rather than screaming GLITTER!!!!1  It was a bit on the thick side, but I think that was just due to the shimmer packed in there rather than it just being a straight creme. 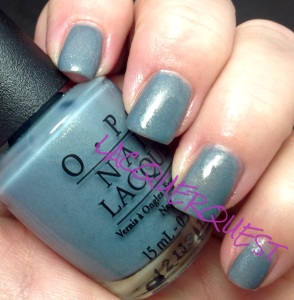 I really biffed the little finger on this hand, but I’m showing it anyway as you can see the shimmer a little better:

There is another shade in this collection called I Don’t Give a Rotterdam that, on first glance, looks just like Herring Problem.  I ordered them online and couldn’t decide between the two, so I got both (of course!). It’s funny, when you hold the bottles in separate hands they look identical, but when you put them together… 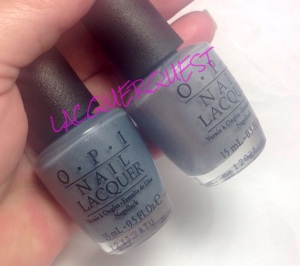 That’s Herring on the left and Rotterdam on the right.  See what I meant about the green in Herring?  You don’t even notice it until you hold it next to the slate blue Rotterdam.  In fact, I would have described Herring as slate blue before I compared the two side by side.  I think that Rotterdam also just has silver shimmer with no gold, but I can’t tell for sure until I actually brush it out.  When I do the Rotterdam manicure I’ll try to remember to use Herring as an accent nail in order to have a side by side comparison on the nails.

Here’s something else strange about these two; when I was looking for Rotterdam in order to compare, I couldn’t find it.  The label with the name has fallen off of the bottle and I kept picking it up and saying “no, that’s a gray shimmer”.  After I’d gone through the entire box of OPI I broke out the swatch sticks, compared and, sure enough, that “gray” was Rotterdam!  It didn’t look blue until I held it next to Herring.  Colors (and our perception of them) are weird….

2 thoughts on “OPI – I Have a Herring Problem”